Whilst on a recent trip to VK2 to participate in my other pastime of Marathon Kayaking, I made sure to pack my SOTA kit and planned to activate at least a couple of summits.

I had limited time, but managed to find a couple of hours on 3 consecutive (week) days and was able to do 3 activations

On Monday (27/10), I was only 15km away from Summit Point, which is about 5km North of Mt Sugarloaf, a hill I had climbed countless times as a kid.

A quick look at the website, and access seemed to be reasonably easy – with a drive up to near Mt Sugarloaf then a 4.8km drive on a well maintained dirt road to a small parking area just below the summit.

I grabbed everything and did the quick walk up to the summit, obligatory photo of the summit then moved just below the plateau and set up out of the wind.

Yes, it was a week-day, and I was hopeful that the band gods would be kind and grant an EU opening, but no such luck.

On Tuesday, we were heading down to the South Coast and after checking, Knight’s Hill, looked to be reasonably easy to access and not too far out of the way.

We were only going to have a short time to do the activation, so decided to just do 40m and 20m as well in the hope of adding some VK5 or 6’s to the logs.

Given we could drive right to the activation one with no access to the actual summit, parked up, grabbed the gear and did the walk in/out of the zone then set up, tieing the squid pole to a convenient post near the side of the road.

It was pretty windy again, with nowhere out of the wind, so just set up and made the best of it, sitting on the ground. 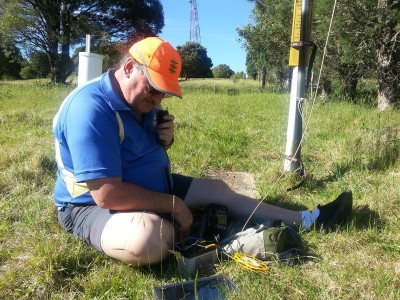 Managed 9 contacts on 40m and a single contact on 20m in about 20 minutes.  Once again, not bad for a Tuesday afternoon.

You can see the RG316 being blown well away from the squid pole!

Finally, on Wednesday, we made a diversion on  the drive back to VK5 and called into Mt Gibraltar.  Again, this summit was chosen because it seemed like a fairly easy one to get to in the limited time we had, given that there is a road around the summit that is within the activation zone.

We drove around the summit and found a convenient parking spot near the side of the road that also had a track both up and down.  Grabbed the gear, walked down and out of the activation zone, came back up across the road and onto a sparse rocky area with just enough places to set up.

A convenient flat rock would serve as an operating position, you can see the comms towers in the background at the summit. 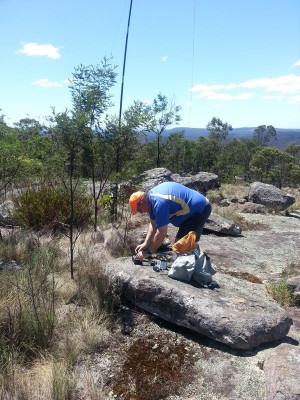 Just about ready to start, plugging the coax into the KX3. 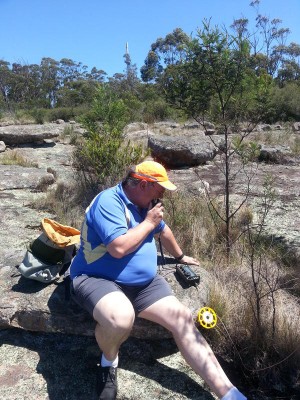 Once again, being a weekday, we decided to start out on 40m then also try 20m once the calls dried up.  We had 13 contacts on 40m and again, just the 1 on 20m.  Again, given that it was early afternoon on a Wednesday, I was pretty happy to get the contacts.

One of the contacts, Andrew, VK2UH invited us in for a coffee on our way past his QTH, which we did a few hours later. 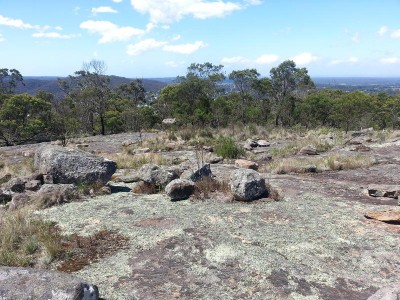 Anyone who has ever been up to this summit will know that it is not the most attractive, and this was the view out to the East from the operating position.  At least the access was easy!

With these 3 summits I have pushed my Activator score to a massive 23 points, yep, maybe in a few years I’ll be up to the front left hoof of that goat 🙂  A big thanks to all of the chasers who make it worthwhile.  As an aside, I was able to chase a few activators from the mobile as well – bumping my sloth count up just a little bit as well.