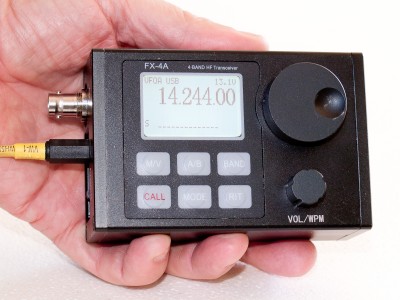 Spec- wise the FX-4a looks to fit into a hole in the market of available QRP portable HF transceivers. 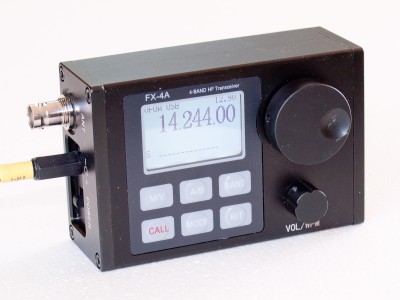 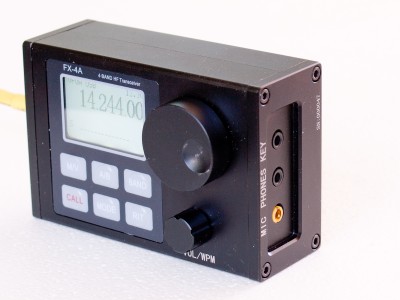 First off, a quick look at the manufacturer’s specifications.

The Specifications for the FX-4a

Theo’s normal CW set-up is with his IC-7410 and his Bencher Paddle.

The FX-4a – tuning in CW mode was fine – the Filter is sharp enough to tune a single station. Using an external speaker, there is plenty of volume to comfortably listen. The sidetone tone can be adjusted via the menu, but for the testing was left at the default 800hz

Usage, The built-in keyer is variable from 5-50 wpm and we set the speed up to around 18wpm – which is about Theo’s normal operating speed.  The Menu was configured for his Paddle, and then we tuned around the CW segment on 40m to start with and connected to his normal OCF dipole.

RX sensitivity was pretty good – no trouble using the SDR to “spot” and then tune to any signal that was seen.

With the tuning steps set to 10hz, tuning was crisp and precise, with the 100hz and 1K tuning steps making it easy to scan the band (segment).

A little bit of checking, by sending a CQ – and Theo found that the Keyer was ” a bit clunky..” by this, it was not perfectly clean with a bit of lag and non-responsiveness at times. After a bit of trial and error, and adjusting the keyer speed a bit (up to 21wpm) it was a bit better.

Theo had a few calls and contacts on both 40M and 20M and after a bit of getting used to it, he described the CW keyer in the FX-4a as “a bit different, not as good as his 7410, but certainly usable once you get used to it” – but good enough to use.

As a direct comparison, I also had my KX3 with me – and the KX3 is the Benchmark QRP/Portable TXCVR. We connected up the Bencher paddle, and antenna to the KX3 and Theo found the keyer to be very similar to his IC7410 – nice and smooth by comparison.

Summary: Features are fine (adjust tone, set keyer type and also A/B, tuning steps, RX filter, keyer speed), configuration via the menu – took a few tries to understand the options and set up the paddle, but once done no problem. The keyer itself is a little “clunky” and not as refined as keyers in more expensive rigs. 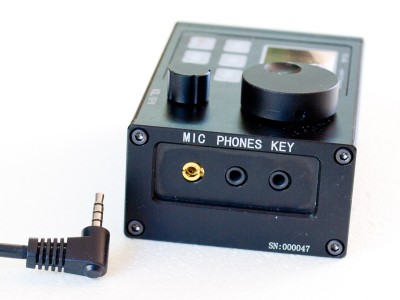 I took advantage of the 2nd Year anniversary of the SANPCPA and went out and used the FX-4a on 2 portable activation’s over the weekend.

I used my normal 4s 5000maH LiP battery and fed it via a DC-DC 12A step-down module with the output adjusted to 13.0V

Initial impressions on the RX was that it was pretty good –  I had no problems making several contacts.

Whilst the RX is quite basic – fixed filter, good working AGC with just a tuning knob, and a volume control.

On the volume, the supplied speaker-mic for RX is fairly quiet – but usable in a pinch!  as this rig has no internal  speaker, you will need a suitable external speaker or earphones.  I was using it with an external 8 ohm speaker and found that about 1/3 volume was quite comfortable.

TX – no bad reports on TX and i was using the supplied speaker-mic.  My initial testing of the mic indicated that I had to be very close and really “talk it up” to drive the radio, so I pulled it apart and drilled out a 2mm hole  which was a big improvement – “normal” speaking volumes 2-5cm from the Microphone would drive the TX just fine.

Power Usage:  This is where things get interesting!  This thing is a real miser!  For my first activation, it was around 2 hours, and my little battery usage meter on the lipo indicated that I had only used 11% of my battery capacity.  My 2nd activation of about 2 hours on the same battery gave a repeat performance, with only 24% total usage from the battery.   So, Yes, It is fair to say that even a much smaller (and lighter) battery such as a 3s 2200maH (220g) would give 4+ hours of use and additionally remove the requirement for the DC-DC step-down converter as well.

Menu and user interface:  The usage is pretty straight-forward – simple to change bands, change tuning steps, swap between the A and B VFO’s.

Summary:  Easy to use, small and lightweight, Capable basic TX and RX.

Real-world usage is only half the Story, and that half is positive. so onto the bench testing. I arranged with Matt, VK5ZM to assist in the testing, as his test bench is much better equipped than mine!

All tests were carried out using a 4S Lipo and a DC-DC buck converter with the output voltage set to 13.0V

(measured on the 13V input)

Using a calibrated signal source, set to 7.120 it was plugged in using my standard 10M run of RG316 (cable and connectors approx 1db of losses) the MDS (minimal discernible signal) was down at -132dbm.  we tested this by having a carrier mid-way in the audio passband and turned the signal down until it was no longer heard, then verified by sweeping across the RX as well.

MDS at the connector is a very respectable 133dbm or 0.045uV

Next, we set the signal source up to -120dbm and did a sweep across the filter.  The filter bandwidth was found to be 2.1kz wide at approx -10db point.   A quick sweep at -90dbm indicated that it was out to around 4.4khz – again quite respectable.

Key-down  it was 12W.  Much better than the expected 5W

During the testing the sidetone became pretty annoying, so I jumped into the menu and set it at level1.  When I next keyed up this was a little surprise – as the CW output actually dropped off to 1W.  A bit puzzled, a bit more testing was done at each sidetone level from 1 thru 10.

This then led us to believe that the CW being generated is by injecting an audio signal into the SSB, and most likely the explanation for why the CW keyer felt a little off when Theo was testing!

The simple grab the mic and whistle indicated that the PEP is around the 8W mark, but injecting 2-tones, the maximum output was up at 12W again.

The final things that we looked at was how clean the output is, so it was hooked up to the Spectrum analyzer.

Opposite sideband suppression  was more than 50db  down on the wanted sideband, as was the carrier suppression – so we have a good, clean SSB signal.

The noise floor of the spectrum analyzer was about 65db below the carrier.

Key-down on all 4 bands indicated that there were no sign of any mixer products at all, if they were present then it is less than -65db

The worst IMD products were -25db, and on seeing this, Matt’s comment was “I would have no hesitation using this as an exciter and driving to 400W – that is pretty good”

Now where would any Ham be without pulling something apart to look at the internals! Of course we wanted to take a look. 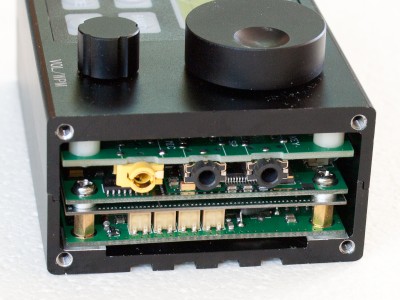 First off, the case on this is good – excellent fit, and feels rock-solid. Reality is, that I wish the physical construction of the KX3 was as good!  Inside the case there are 3 Circuit boards – The display/processor and audio board (top) – The Mixer/IF board (middle) and the output/PA board, which has a shield between it and the Mixer board (bottom) 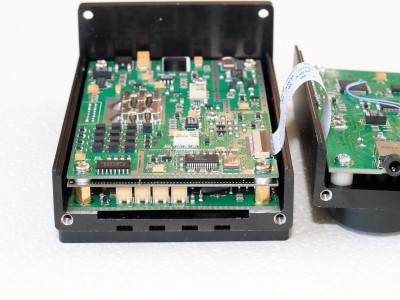 All boards were inspected under a 50x scope to check the quality of the assembly – all looked to be of good quality.  It was reasonably easy to identify the major blocks – the Micro-Controllers, the Mixer, IF Amplifier, 6-pole Xtal filter, the DDS’s – yes there are 2 in there, the Drivers and Final Amplifiers. 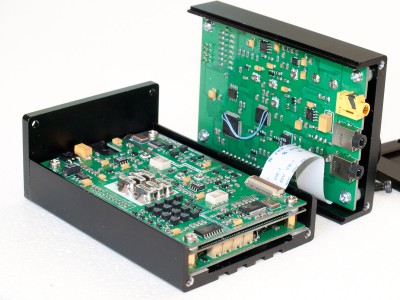 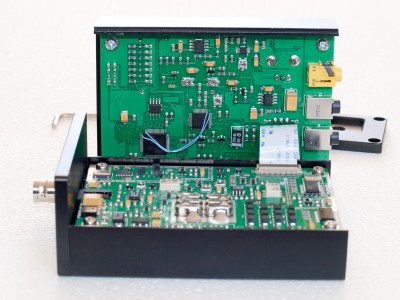 All tests show that it is a good quality build, and good specs.  Short of physical abuse, there is not a lot to go wrong.  Yes as noted, the keypad may be a weak part, but only time will tell on that.

Short of dropping it into the knobs or BNC connector this looks like it will survive being in a backpack and regularly used as a portable HF rig for a long time.

Honestly, look at the spec’s of both the Yaesu 817nd  and the KX3 – you will see that it falls right between them.

The bench testing results did reveal a few interesting insights (CW being an audio injected tone) but they also validated everything else that was already determined from real world usage.

OK time to rate it:

CW 3.5/5
As noted in the testing, the keyer is only OK, and as identified on the bench testing, the probably reason was identified.  Yes, it works, it has a keyer, it is configurable for straight key, and Iambic A and B.  The added bonus is of course, that the output power is adjustable via the sidetone level.

Build Quality: 4.5/5
Nice solid aluminum case, VFO knob feels great to use, standard connectors.  The only potential issue as already noted is the membrane keypad and that the connectors are soldered directly the boards,

Ease of use:  4.5/5
A quick look at the User manual and a 3 minute play with it and you know everything that you need and want.

Supplied speaker/mic is adequate, adding an external speaker or headphones is a big improvement.  There was no supplied power cable – so I had to supply a standard DC 2.5mm plug.

Where it fits in the marketplace – well that is easy!  This is the perfect ultra-lightweight SSB HF transceiver that is incredibly capable.  Let’s be honest, Not everyone can afford a KX3, and with this rig you will not feel you are wanting. A quality contender and a serious step up from some of the other cheap HF radios that have hit the market over the last 3 or 4 years.  It nicely fills the gap between a kit and the KX3 (which I consider the Benchmark in portable HF)

With 40M and 20M being the 2 most popular HF bands for SOTA and portable operations in general, it would also be a great First HF radio for an “F” call.

I  would not hesitate to recommend anyone wanting a compact portable HF rig or even a 2nd or 3rd portable rig to get one!

I am currently negotiating with the designer of this little radio to be the VK dealer, more information to follow as and when this may occur.   Bottom line, I would not even consider putting my name against this if I was not happy with it!