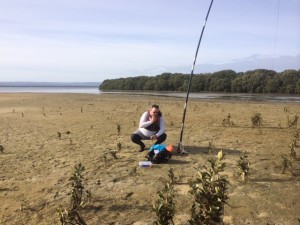 Lets just step back a bit and see what it took to get here.  Last Monday, I gave Andy ‘5AKH a call and asked if could borrow his KX3 as I was planning to go over to Torrens Island CP  and Activate it on Anzac Day.  My request was countered with ” Can I borrow a kayak and I’ll bring my radio with me!”

With a final check of the weather reports and tides  saw us meet up at St Kilda boat ramp at around 08:00 (local time) where we sorted ourselves out and packed up to paddle the approx 2km over to Torrens Island Conservation Park. 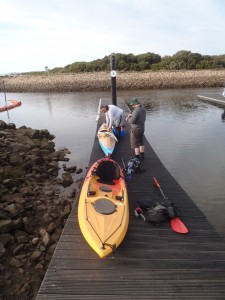 We arrived a little after 9am right on low tide and dragged the Kayaks up above the expected tide level onto the beach.  We quickly assembled the station – a sand spike to hold the squid pole, up with the pole and we tied off the dipole to some mangroves. 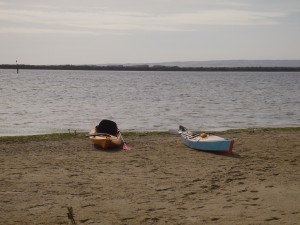 Whilst I was working thru the calls, Andy was also busy, taking a few photos – you can see them on his Blog.

After the initial contacts, Andy came up and he also called CQ as AX5AKH.   Of course, given that the new day (UTC) had rolled over, he had a few repeat calls, but within the next 20 -30 minutes he logged 8 contacts in the log.

We then switched over and I made a CQ call under the Club Call of AX5ARG and we made 2 contacts.

About this time we had a visitor drop in on us – Matt, VK5ZM was out with his boys in the boat and he had gone via St Kilda and picked up Ray VK5RR and they joined us on Torrens Island.

Since he was there,  and we had both been calling, we told Matt to give it a go!  He also put out a call – and logged a further 7 stations in just 6 minutes! 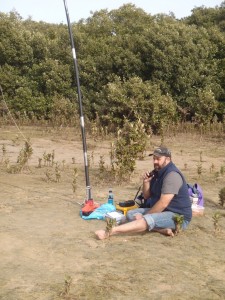 With the tide showing signs of coming in, I made a final call and logged 3 more stations before we decided to pack up and head back to St Kilda.

A big thanks to everyone who answered our calls from this first activation of Torrens Island CP.  Given that the only access to the CP is via water, it takes a bit more planning and effort than the CP that you can drive right up to and I can hope that someone else will activate this CP again so I can log it as a hunter.

Much like the ANZAC’s 99 years ago, we arrived by boat and landed on the beach, but unlike all that time ago, we did not have anyone shooting at us.  Lest We Forget.

We came, we landed, we called CQ.

Apologies to anyone up front if you were calling as AX instead of VK, as we only logged the number’s and not the prefixes for most stations.  Please do let me know if you called as AX and I will adjust my logs.

Cannot promise to add a new park to the activated list next time, but hope to hear you from another NP or CP on 40M soon!