Well, for something completely different.

We decided to have a go in the VHF/UHF Spring Field day.  With the introduction of the (up to) 4 band section, and having both reasonable power and antennas for the task on the 3 low bands where we put the station together over a few weeks and yesterday morning got out and had a good solid go in the 8 hour section.  The intention was to operate SSB and FM on 6m, 2m and 70cm

For the location, we decided on the Ardrossan lookout at PF85WN – which is about 80km (los) across the Gulf back to Adelaide. 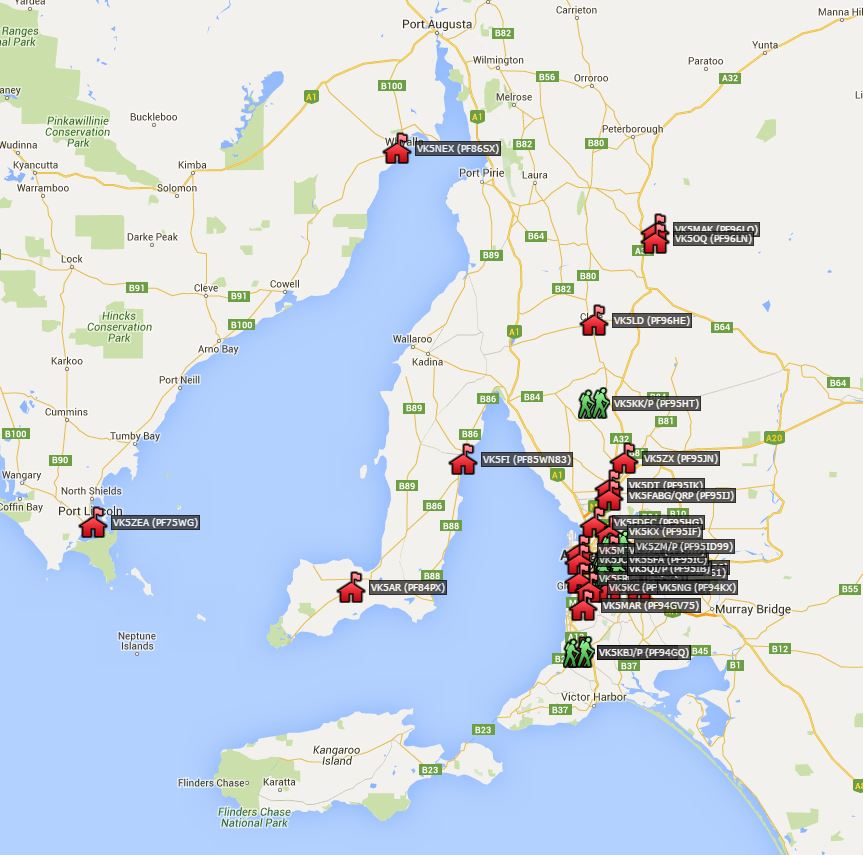 Now a little about the station we put together

To power the station we had a 165aH AGM 12V battery, and A huge thanks to VK5AKH for the loan of his Honda Generator – which we used to “float” the battery and to also provide power to the logging Laptops – we had no issues at all with power for the day.

We had the battery in the trailer, which also served as a support for all the antenna’s.

The station consisted of 3 txcvr’s – 1 for each band we were operating.  All 3 Radios used have remote heads, which makes setting up a lot easier than having to set up right next to the battery in the trailer!

We used the Armstrong method for rotating the beams.

The station was quite simple – we put back into service the ancient IC-706  and coupled to a 2 Element Beam (horizontal), running a full 100w.

The antenna was on the same pole as the 70cm beam and up at about 4m High.

On 2m we used the IC-7100 feeding a 6 Element Beam (Vertical) on it’s own pole up at around the 4.5M mark.  After about the first 2 hours, we realized that when you unplug the remote head from an IC-7100, that it reset the output power – so for the first 2 hours, we were only running 1W output instead of the intended 50W!  (and surprisingly, we did not really suffer too much as a result).

We also put up a Slim-Jim vertical at 10M high for 2m and had it connected up to a handheld, but in the end did not use it or the contest.

On 70cm we opted to us the TS-2000 – as it is the highest power we have on this band.  It was coupled to a 17 Element short boom yagi (approx 2m long) and put on the same pole as the 6m antenna at about 5M high.  We set the polarity to be 45deg – so not truly vertical or horizontal.

We arrived at the Ardrossan lookout with a bit over an hour to set up. 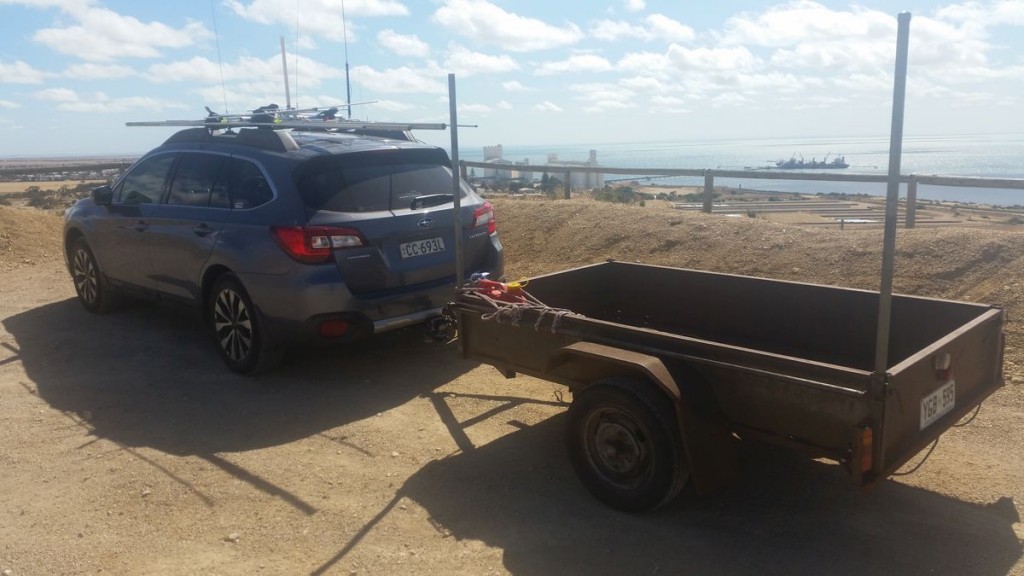 Overlooking the Gulf from the lookout with the antennas on the roof racks.

So, we positioned ourselves where we could set up and operate and also so as not to be in the way with other visitors to the lookout and set up the station. 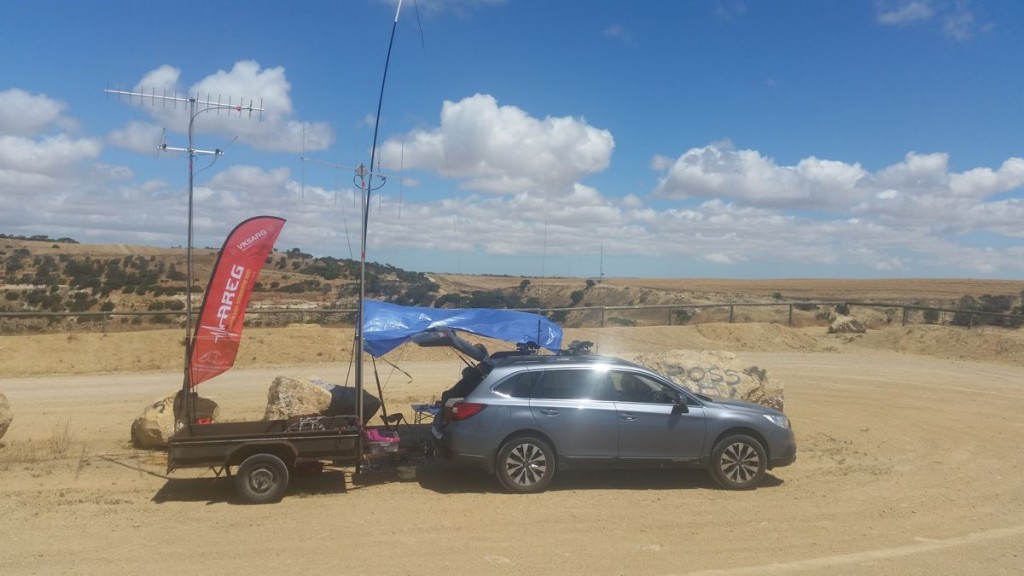 The station, set up and ready to go.

Just out of the photo to the left we set up the generator near the rock,  The trailer – it has the battery in it and also supports the 2 (3*) poles for the antenna’s.  The plastic box on the draw bar contains the 3 transceivers – all close to the power source!  On the Other side of the car we tied up a tarp to provide shade over the table we set up to operate from.

The 3rd pole was the 12m spiderbeam pole with the 2m Slim Jim. 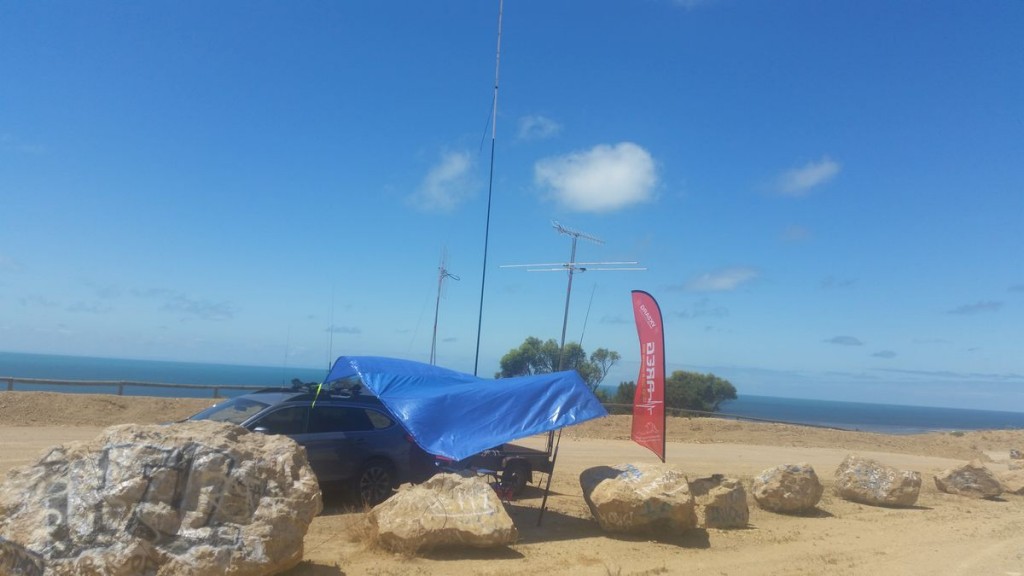 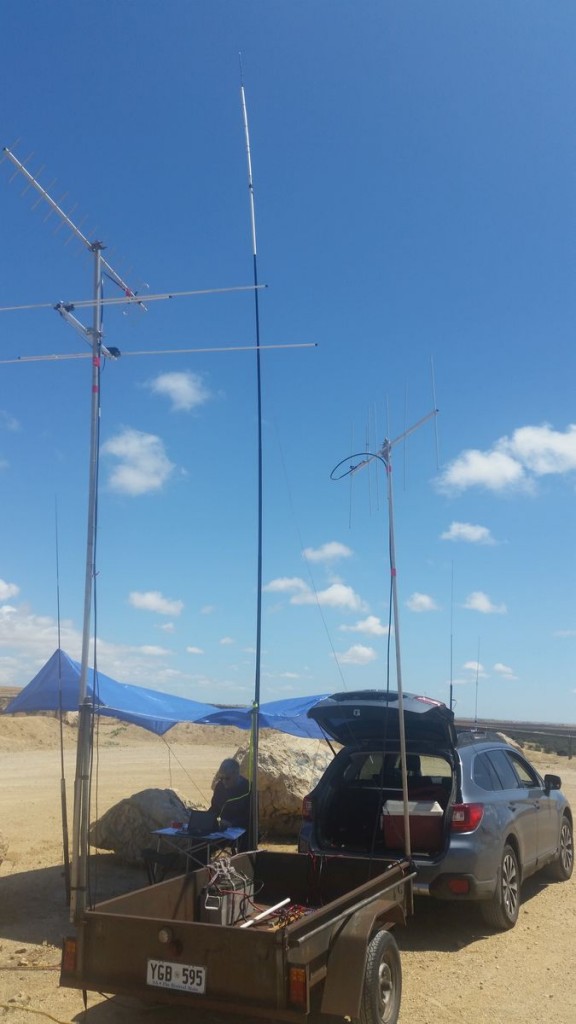 The trailer with the battery and the poles for the antenna’s – and under the tarp is ‘5RR starting to operate on 2M.  The esky was lunch!

We did a simple split – based on the antenna’s – Ray operated the 2M station and I contended with 6m and 70cm.

We were able to plod along and work a reasonable number of stations from this location.  For the most part on all bands we were able to simply leave the antennas pointed (roughly) at Adelaide, but there were a few exceptions where it was necessary to swing around to the North to make contacts.

The day was not great and the wind was quite strong and at around 5:30 the wind literally ripped the tarp to bits!  We had to take a bit of a break and move from the table into the car to keep operating.

With all stations having remote heads, this was not too much trouble to do – just pick up each remote head and feed them in the back of the car.  It made the rest of the operating more difficult.

According to VKCL we ended up with:

Now, we are not really big VHF/UHF operators and it has probably been around 20 years since we did any sort of VHF/UHF contesting, let alone operating portable like this.

A decent, high operating point is a real advantage and having additional antenna gain was most welcome.

2 operators would still be easy to add a 4th band to the mix.  The combination of 6m and 70cm worked out ok.

For this sort of operating, on even these bands we literally pulled together all the gear we had at short notice and went out to give it a go.  It was obvious that there were stations we could not hear from our location and we later found out that there were several stations in the metro area using nothing more than a handheld – these are the one’s we could not hear.

Even the very modest home stations we were able to work in the Adelaide metro area.

For this style of operating, we had about the right mix of power and antenna gain from where we were.  We had no real issues of interference between the bands, maybe a little be of de-sense but nothing too be worried about.

The antenna choices were proven to be effective – vertical polarization (except 6m – we didn’t have the mast height) and the boom length on 2m and 70cm meant we could rotate them without it physically interfering with the other ones on the other pole – it was not necessary to go larger in this case.  It might be a different story if there were stations further afield that  you were chasing – but with the majority of the activity within close proximity to the Metro area  it was a good mix of being both physically easy to manage and gain.

A review on the logs and we determined that the range of all stations worked was between 61 and 158km from us.

One thought on “Team VK5FI”