I recently picked up a 70cm XVTR from http://www.transverters-store.com/432_28mhz.htm – For extra confidence, you can also purchase via their Ebay Store – http://stores.ebay.com.au/tubes-shop

Prices are the same both direct and via Ebay, Ebay for confidence if you are unsure about making a purchase directly from the Ukraine.

It arrived in about 3 weeks, not too bad at this time of the year – I bought the “kit” which includes the completed XVTR, the Attenuator/Interface/Sequencer Board, the case and a selection of connectors to get you all set up ready to use.

You will need a few additional items to put it all together!

There is no layout, nor a complete cabling diagram, you will need to use the individual wiring diagrams of the Attenuator and the XVTR boards to hook everything up.  It is quite straight-forward.

The XVTR is a complete no solder board – you just need to wire up the IF input, PTT, 70cm Output and Power to the 2 4-pin headers.

The Attenuator Board, you need to solder the wires as required to interface.

In order to assemble, you are going to require some additional hardware:

You should also have the following tools.

Soldering Iron (duh!) – my 15/40W was perfect for the job.
(illuminated magnifying lamp – optional but makes things easy)
Screwdriver #1 philips
Drills – 3.3mm (M3 clearance)
Drills – 5mm, 6mm, 8mm,
Round file/Dremel.
First off, I selected a physical placement of the XVTR and the Attenuator boards such that:

I chose to use a different switch than the supplied one, I chose a push-on push-off switch rather than the toggle, because it was a smaller hole to drill in the case for mounting.

There was nothing in the way to indicate any sort of layout of the required connections, so, it really was simply making a sensible choice while keeping all leads as short as possible.  I just picked a layout that would allow a little bit of cable to enable assembly without any cable stresses during assembly.

Mark out and drill the mounting holes in the case for the 2 boards.

First off, you will need to cut 1 of the M3 nylon mounts such that it will support the XVTR board with the MOSFET mounted directly to the case.

Once done, mount the XVTR board – noting that the mounting holes are correct size to thread the M3 bolts thru – no nuts required – and significantly, the mounting hole near the output end, no nut would fit as the air-wound coil is too close!

I used a cut-off piece of the threaded M3 mounting post as the Nut for the other end of the board.

Next, mount the board to the case and put aside.

The ends of the case are plastic and therefore easy to drill and install the connectors and the power LED.

I used a sticky label on the inside to mark out the position of all the connections and then proceeded to drill/file (as needed) to fit the connectors to the Input end:

I positioned the connectors to align across the top of the end panel so that there would be no interference with the mounted board and still allow a sensible layout of the leads.

I mounted all the connectors, and a little quirk indicated that the only GND input to the Attenuator board is via the Input Coax, so on the switches, I tied the GND connectors from the power, RCA(PTT) and BNC (IF in/out) together across the back of the connectors on the panel.

Once done, then I secured the end panel to the bottom of the case and hooked up all the connections.

I wired up the LED I put on the panel (with the 2.2K R) to the switch output with a bit of the heat-shrink over the lead and resistor, and the other end to the common earth bus. At this point, I applied power to verify everything.

I did note that the attenuator board does in fact have a power LED and an PTT LED on it – which is good for checking while it is all apart, but you will not see once the cover goes on!

From here, I now wired up the 2x 4-pin header connections from the Attenuator to the XVTR board. As I was dealing with power and PTT close to either an RF input or output, I opted to put a bit of heat-shrink over the soldered connection to the header pin to ensure I didn’t short out anything.

Next step was to to then mark out the 2 BNC connectors on the other end – the HF-passthru and the 70cm ports and mount them to the end.

Finally, everything wired up, and hooked it all up with the KX3 configured as the IF, attached an antenna.

With a drive requirement of 1-10mW and the 30dB attenuator, I set the KX3 IF Max output to 7W (7mW after the 30dB atten). The Attenuator has 30dB in front of the variable – and I wanted to set the pot for no extra attenuation of the input.

Knowing I was in safe territory and would not exceed the 10mW Max IF input to the XVTR, I then set about setting up the atten drive. I set the KX3 to output 2W (or 2mW) and then using a nearby Handheld without an antenna on it, adjusted the pot for Maximum RX signal.

At this point, it was ready for a couple of final photos and close up the case – nothing more to do in there.

Once closed up a couple of simple on-air tests were conducted with a nearby station (Thanks Ray – going mobile about 3km away!) where we conducted a series of tests.

First off, a quick test on FM, and It delivered a similar result to the handheld running at 2-3W output.

It did not seem to drift any more after the initial 3-5 minutes of use and warm-up, but time will tell.

I will of course note the offset and map it out and apply the required offset within the KX3 XVTR configuration so the display reads correctly.

For the cost, this is a great little afternoon project of mostly a mechanical build that will give you 70cm capabilities in an ultra-small, lightweight package.

Now, I just need to get out there and experiment with it somewhat to determine the real-world sensitivity and actually measure and plot the output power with various input power settings.

As today saw the temperature plummet from the heatwave of the last 4 days, I decided to duck up the hill to Mt Gawler – VK5/SE-013 and see what the bands were doing – well, that and go out and hope to get a VK5  to ZL1 S2S as there was some ZL1 activity going on.

This was a bit of a different activation today as I went with a little bit of new kit for the first time. 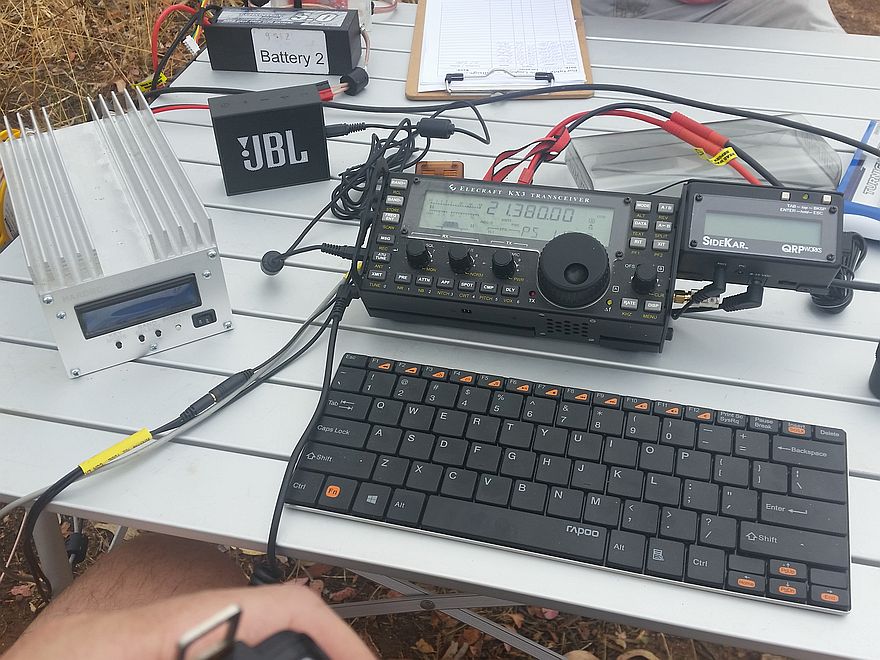 Ok, the SideKar and keyboard for direct entry logging is not new, had it for a while now and am really starting to get used to it rather than the paper log.

You might have noticed the external amplified JBL speaker, but no, that’s not it either!

I have had the kit for a few month’s and managed to put it together about a week ago and today was the first time I have had a chance to give it a run in the field.  By All reports – the bit of extra output helped – pretty good reports all day.

Band conditions were very strange – very short hops on bands where it was not really expected!

I was able to round out the day with the final station logged of VI3ANZAC on the last day that this call will be activated.

I did see the spots for ZL1 activation on 20m and could hear a few of the chasers, but alas, no VK5 to ZL1 S2S today, but hope it won’t take too long to get one!

As always, thanks to all the chasers as you make it all worthwhile.

Like  many of us, I am forever on the look out to managing power connections and of late have been moving more towards standardizing on Powerpoles for my (up to) 45A Connections.

Recently, I purchased one of the WARS (Waverly Amateur Radio Society) Powerpole Kits and finally found a bit of time to assemble it.  I won’t go into any details on the kit – all the info is available from the WARS site.

The assembly is pretty straight forward, just take your time and follow the instructions and it will all come together.

Have a decent high-power soldering iron available. My 15/40W soldering iron was on the lowest end of what you would want! It took quite a lot to heat up the connections on the + and – rail sides, there is a LOT of copper on the board.  I would have liked a 60+ W iron to do this, and will borrow one for the next kit I assemble.

It took me a few hours to assemble it – partially because of the low-powered soldering iron and aside from that, just took my time, careful with the alignment of the power poles and the fuses. What I didn’t do, but should have done is to trim off the leg lengths of the #13 wire on the power poles BEFORE soldering them to the board – it was difficult to trim them off after soldered to the board as you will need a strong pair of snips to trim them.

It all went together just fine and now I have done it, I need to purchase another couple of these :).  This was bought for a specific purpose and also to see if it would make a suitable alternative to a commercial one – wins on all counts.

After assembling there is room for a few Improvements:

If you install the Input power poles on the board at the 90Deg (like mine) the instructions say to make the cut-out 18mm wide and 15mm deep into the case. the 18mm is a nice neat fit, but the 15mm leave a big gap, I would say that 13mm is more than enough.  It is easy to trim a little more out, but much harder to add it back in!

Additionally, the print-out for the cut-out in the top of the box is also wrong! It is way too long – the end closest to the INPUT should be about 3mm less than the template. The end with the LED is correct.

Be careful with the alignment of the template when cutting it out – as mine was about 1mm off to 1 side and I had to ease the opening out a bit wider so it would all go together.  You can see that on the side of the power poles that there is an extra gap – as the cut-out was slightly off, and the side near the fuses needed to be eased slightly for everything to fit.

The kit includes insulated spade connectors which are used to hold the fuses.  I tried following the instructions supplied, but found it faster and easier to cut away the insulation with a knife.

A nice touch is the blown fuse indicator – where a small red LED will light up when a fuse blows making it obvious of where the problem lies.

You can see the bi-coloured power LED.  With the correct polarity, it is green, reversed it is red – you don’t want to see it red, but at this stage, you do want to test it to verify.

At around 1/3 of the cost of an equivalent commercial product, adding a couple of these to your portable and field day kits will not break the bank – and provides an easy, convenient way to fuse protect your equipment, with enough outlets to power almost all of your equipment.  For that matter, adding a few to your shack as well is a good option for DC distribution

Those minor issues aside, pretty happy with the end product.  All in all, I rate it as 4.5/5.